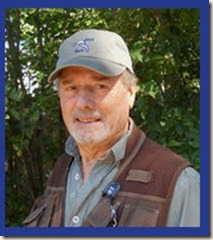 Born in eastern Pennsylvania, Wendell (Ozzie) grew up fishing streams of the eastern coal regions. His passion for trout and their world began at age six, when a brook trout fell prey to a garden worm. That passion continues unabated for the salmon and trout he now pursues with fly rod and camera.
After serving four years in the US Navy, Ozzie spent his professional career in training and course development in the power generation industry. His experience in teaching allows him to discuss the nuances of hydrodynamics and make them understandable.
Years ago Ozzie combined his love of trout with a lifelong interest in movie making resulting in his series of underwater videos that explore how trout feed, spawn and behave in the wild. His narrated video presentations chronicle wild and hatchery trout in their natural environs and have opened the eyes of thousands of anglers in the United States.

Ozzie’s dinner presentation to the FFV was titled…

Not Just Trout answers the question “Why do we love to fish?” It includes the most picturesque and unique clips of trout in their liquid environment together with other creatures, flora and fauna – both above and below the water’s surface – that were encountered during many years of filming the underwater world of trout.
Also included are the transformations that wild brook trout go through from the color change in early autumn, to the actual spawning sequence.
Not Just Trout is tailor-made for a banquet presentation since it appeals to everyone in the audience including non-fishers.

Here are some photos from our 2012 Annual Banquet. 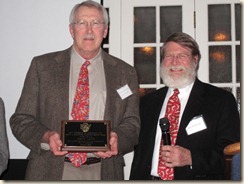 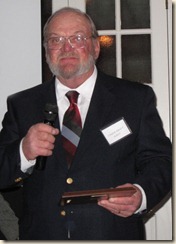 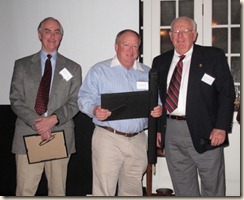 Dan Genest received the 2011 PHW  Regional Volunteer of the year for the Virginia’s Region ( VA and WV).

Temple Fork Outfitters is the sponsor of this award program and provides each winner a TFO BVK rod with the winner’s name on the rod.
Having supported PHW for the 6 last years, Dan is much deserving of the award. 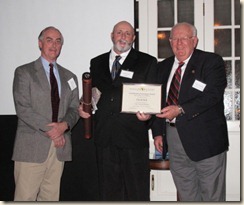 David Hall received the 2011 PHW  Regional Participant of the year for the Virginia’s Region ( VA and WV).

David was awarded an Orvis Access rod and reel. 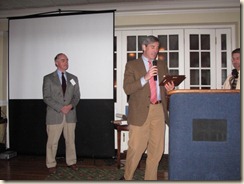 The James River Association was given the Taylor Turner conservation award.

Bill Street, Executive Director, accepted the award on behalf of the Association. 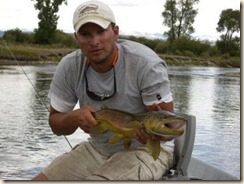 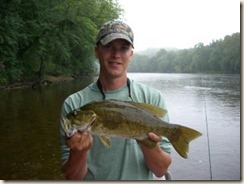 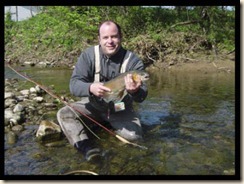 Have you ever wondered what it is like to land in a foreign airport with the goal of spending a week on world famous water highlighted frequently in the national fly fishing magazines? Mark is going to share some of the experiences he has had while photographing and fishing destinations in North, Central and South America. This entertaining program, filled with inspiring photography, will give you the inside scoop on international fly fishing travel; the good, the bad and the ugly. He will also share with you why he passionately encourages avid anglers to pursue their dream destinations. Tips will be offered on finding the right location, how to get the most impact from your fishing photography and most importantly – how to get your wife to support your addiction.

Mark Sargent is an active member of Fly Fishers of Virginia. He has been a professional photographer for the past 25 years. After leaving Kodak fifteen years ago he has specialized in editorial, commercial and portrait photography. Mark’s images have been featured as photo essays and cover shots in Gray’s Sporting Journal, Fly Fusion, Catch Magazine and Fishing Wild. The Orvis Company has utilized his images in their fly fishing catalogs. Feel free to bring lots of photography questions on May 24th.

FFV member Robert Thomas lead a seminar on fishing for Striped Bass in the James River in Downtown Richmond.

Learn all about the tackle and flies needed as well as when and where to go. We have a wonderful fishery here and there are some trophy fish available.

Rob says he personally knows of two 44 inch fish and two 37 inch fish being landed this Spring and the Game Department shocked up one weighing 63 pounds.

Want to know where to fish within a couple hours drive from Richmond? Have questions about where to find a particular species? Who better to ask than the Agency Outreach Division Director for the Virginia Department of Game and Inland Fisheries and the Angling Education Coordinator for the VDGIF Outreach Division . Lee Walker and Chris Dunnavant will be sharing some of their prime fishing holes as well as updating us on the “Going Ons” at the Department.

Be sure and bring your DeLorme map book as Lee and Chris have promised to pinpoint some of their secret spots. These guys have the inside track when it comes to knowledge of Virginia Fisheries.

Robert L. Walker, Jr. (Lee) is currently the Agency Outreach Division Director for the Virginia Department of Game and Inland Fisheries (VDGIF) and has been with the agency for 25 years.  His current job involves responsibility for supporting the mission of VDGIF through education, public relations, marketing, and various communication and customer service efforts designed to increase awareness about Virginia’s wildlife and natural resources.  Prior to that, he was the editor of Virginia Wildlife magazine and an adjunct professor for the School of Mass Communications at Virginia Commonwealth University.  Walker received his B.S. from Ferrum College.  He has received many awards including the National Academy of Arts and Science Telly Awards in 2001, 2002, and 2003; The Virginia Public Relations Association Gold Medallion for Best Documentary in 1996, and the Virginia Associated Press Broadcasters Douglas Southall Freeman Award for Public Service by a Television Station News Photographer 1987. A native of Virginia, Lee enjoys fishing, hunting, and is an accomplished outdoor photographer.

Chris Dunnavant is the Angling Education Coordinator for the DGIF Outreach Division and conducts angling programs, workshops and trainings throughout the Commonwealth. Chris authors a column in the DGIF Outdoor Report called The Fishing Spot and hosts a radio segment called “The Weekly Wildlife Chat” on the Sports Radio 910 AM program, “The Weekend with Anthony Oppermann.” He enjoys fishing for multiple species from his bass boat, kayak or while wading; bass, sunfish, crappie and stripers are his top pursuits. Following graduation from JMU in 1997, Chris pursued a career as a professional bass angler for nearly five years with top 10 finishes in both FLW and B.A.S.S. competition. 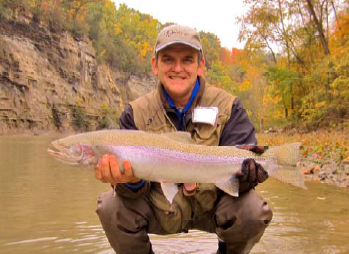 STEELHEAD—the fish of obsession for many anglers will be the topic of a presentation by long time FFV member JoeTregaskes. The Lake ErieTributaries are only a day’s drive from Richmond. Learn from one of the best how you to can enjoy this world class fishery.

I grew up in western PA where hunting and fishing were the primary outdoor activities for a kid. I started fishing for trout around the age of 8 and early on, worms, minnows, and Mepps spinners were considered
the only sensible “bait”. The introduction to fly fishing came in my late teens. My interest was mainly trout until I caught my first Steelhead. This was 15 years ago on the Anchor River near Homer, Alaska and I can
still visualize the event like it was yesterday. As fortune determined, when I returned home I found an article in Fly Fisherman Magazine which featured Steelhead and Brown Trout fishing on the Salmon River in Pulaski, NY. A month later I was there and the addiction was fully embedded. While early on I focused on the Lake Ontario tributaries, for the last 10 years or so it has been solely on the Lake Erie tributaries from western New York through eastern Ohio where I usually do 3-4 trips per year. 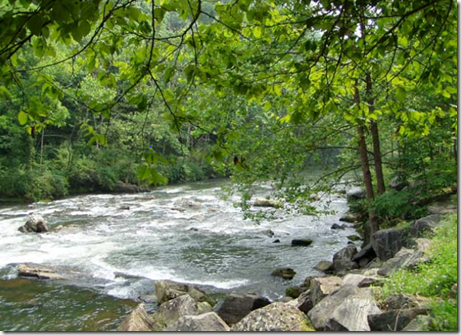 Our November 15, 2012 dinner speaker will be Dargan Coggeshall.

Dargan Coggeshall is the founder of the Virginia Rivers Defense Fund (www.virginiariversdefensefund.org) and a defendant in the Jackson River trespassing case.  He has a BA and MBA from the University of Virginia, and when he is not defending the use of public rivers for the benefit of all the anglers in the Commonwealth, he can be found fathering three little anglers and running a business in Charlottesville and Chantilly (soon) that helps children with learning disabilities.  In his spare time (ha), he likes to pursue trout in the Blue Ridge mountains and on the Jackson, smallies on the James and Shenandoah, shad and stripers on the Rappahannock, and ……..  He is contemplating moving to West Virginia where the threat of being sued for using a public river is non-existent.

Mr. Coggeshall will talk to us about the litigation involving the Jackson river. 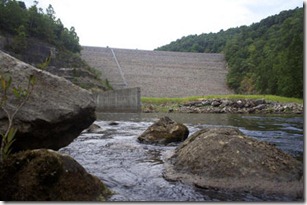 Article in the MidCurrent Web site about the outcome