Our November 2006 dinner speaker was Paul Bugas
The Shenandoah River earned a national reputation as a top Smallmouth bass destina-
tion and then a series of highly publicized fish kills over the past few years wiped out
many of the fish over 12 inches. While both the North Fork and South Fork’s of the
river hold many Smallmouth in 6- to 10-inch range, biologists are still trying to deter-
mine what caused the fish kill and how to prevent it in the future.
Paul Bugas works out of the Virginia Department of Game and Inland Fisheries office
in Verona, and is a member of the task team investigating the fish kills. Bugas will be
our speaker at the club meeting on Nov. 16. He will discuss the findings of the task
team so far, the current state of the river and what the future holds for this famous
fishery.
•Paul Bugas, Jr. is a Senior Fisheries Biologist for the Virginia Department of Game
and Inland Fisheries. Paul earned a B.S. in Forestry and Wildlife from Virginia Tech
and immediately thereafter began work as a seasonal employee on the original Trout
Stream Survey. He was hired as a Fish Biologist Assistant two years later and was
eventually promoted to District Fisheries Biologist and Fisheries Biologist Supervisor.
His fisheries related interests are varied and include wild trout management, water-
shed ecology, and public outreach.

This dinner was held at our new venue, the Salisbury Country Club. 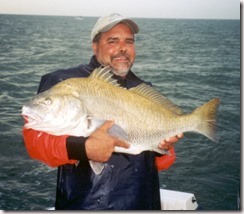 Captain Mattioli specializes in guiding on the Chesapeake Bay on the ‘Matty-J’.

Our May 18th dinner speaker was FFV member

Mr. Pfeiffer talked to us about Shad fishing with a fly rod.

Click here for some photos from the 2006 Annual Banquet!